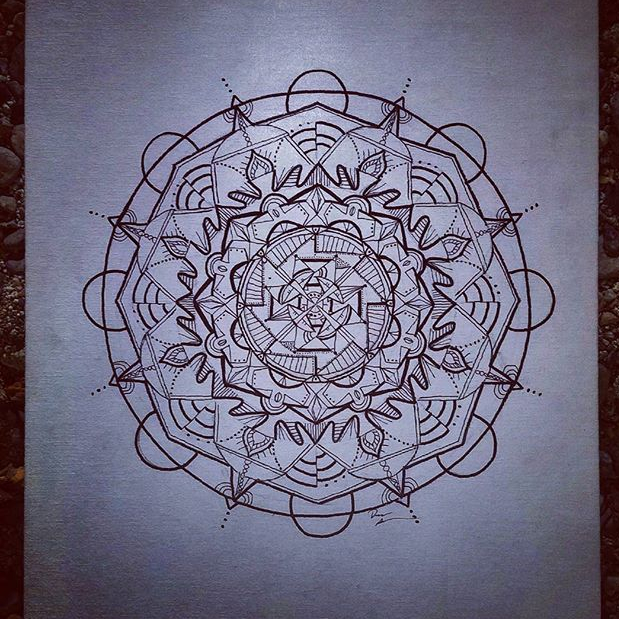 You may have noticed the huge gap in mandala creation from June to September, 2017. I was going through a lot in that three months, the most I have actually gone through mentally, emotionally, and physically in my entire waking life. I had left off at the last mandala creation in June in a wonderful place. After that I fell in love with a dreamy escapade, made a mistake, found out my dad had cancer, then made an even bigger mistake (actually a huge one). I had just made it through all that, yet not quite in the clear yet. I still had a lot to do to get back to a grounded, clear minded state of being.

On the day I created this mandala I felt a strong urge to grab my art supplies and go drive to the river. The sun was interesting to me that day and kept catching my attention on the drive there. I secured myself a nice spot on the beach which I deemed my private beach for the next 5 hours. After I finished this one I felt a great sense of relief and it was dark by the time I was done. It was only after I had posted the photo and scrolled about on Instagram for a while that I realized it was the Autumn Equinox and someone I was following on Instragram posted a similar photo as this:

I also wrote a little something about this mandala at the time of creation, see below:

“Created this mandala on the shores of the American River. Little did I know that it was actually the Autumn equinox, wasn’t really paying attention to that before I started. Notice the circles (moon cycles) and all the inner workings, almost like a clock. Also the fastest Mandala I have made to date, taking a little over 5 hours.”

This journey of life that we are currently on, is all about finding who we are, figuring out how to embrace our inner strengths, accepting and healing our weaknesses, and fulfilling our purpose. This journey of mine is all about the upward spiral, toward oneness, with each passing rung of the ladder. I hope this blog helps you out there, in one way or another, because that's what I'm here for. I live a purpose driven/cruelty-free/vegan/optimistic/sugar-free/yoga-fueled/fitness filled/adventure filled life. View all posts by raysupjourney

This site uses Akismet to reduce spam. Learn how your comment data is processed.